From home décor ideas to a variety of colorful art inspirations, CGG has everything you need to lift the spirits of your home.

Whether you want to update your bedroom walls or decorate your first apartment, our exclusive collection of wall art and framing will give all your inspirations a colorful boost, perfectly priced.  Choose from our collection of weekly-inspired Color Collections— with wall art inspirations that are chosen with the greatest of care and current color trends. We have wall art collections for every home décor shopper: Need large wall art to fill the largest of spaces? We can help you out with that! Want to brighten up your kitchen or hallway with cherished portraits of nature’s colorful feathered friends? We have those too! We have everything from the Itty Bitty Art Collection that adds inspiration to the tiniest of spaces to a Collection of large to small horses that capture the majestic spirit of these graceful and loving beasts. Whatever nature inspires we have a collection that can decorate or refresh any room in your home, apartment, or workspace, our extensive collection of limited edition and original art pieces are sure to make your home décor ideas take flight!

CGG offers a mix of etchings, offset lithographs, original art, and Giclee limited edition reproductions that are of the highest quality and value, made in America exclusively by the artist’s family. We have artist signed pieces and numbered, limited editions that will not only refresh your home spaces, but also bring value to the art you purchase at all price levels for every shopper’s tastes and budgets. And every piece we deliver to you will include a certificate of authenticity that can be placed on the back ensuring that you have chosen a special and valuable piece of art to inspire your home or office.

We specialize in the artistic inspiration of Americas most colorful and trailblazing artist, Pat Moss. Known as P Buckley Moss because women artists were not always taken seriously, Pat’s work is a combination of boho trendy to country-side warmth. We can help you to inspire a child’s room with laughter and warmth, or bring reminders of your favorite pet friends with portraits of your favorite cat or dog! Pat began painting her surroundings to inspire her children to slow down and truly embrace the world around them. She captured a vision of America’s beloved Quaker communities that thrive all through the United States with painted moments of love, warmth, and traditions from a simpler time that can infuse our homes with family and children, reminding us to power-down for a moment and enjoy each other.

Come visit our gallery—in-person or online—we have our customers needs front of mind with help and direction on framing, home décor choices, art selection, and of course, we specialize in the care of ensuring that your wall art choices will stay colorful and long- lasting so that you can enjoy a legacy of art inspiration and education for generations to come!

Last but not least, we want to pamper you with experiences both locally infused and digitally dynamic—with weekly inspirations of color and fun to refresh, or just inspire you to bring the power of art into your homes. We look forward to connecting with you! 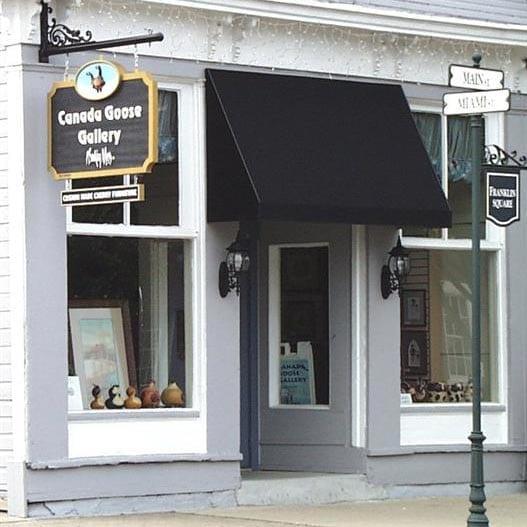 “I did something when so many told me I wouldn’t amount to anything,” said P. (Patricia) Buckley Moss, a name painter based in Blacksburg, Va. “I am still doing and never gonna stop.”

Besides being known for her paintings of rural landscapes and life in the Shenandoah Valley of Virginia, Moss has become the voice of the underdog. She is also a breast cancer survivor; cancer free 33 years.

This is Moss’ way of giving back to women who need it the most, through an organization (PALS — Positive Attitude Love and Support) that is focused 100 percent on healing women.

Moss is equally known for her dedicated work with special education groups and her donations to children-related charities. She gives much of her time and effort to helping others.

“Charity auctions are important to her,” said Maria Bereket, social media marketing coordinator. “Her foundation (The Moss Foundation) takes the money they receive and supports teachers and students who help learners who learn in different ways. Half of the proceeds from the quilt auction will go to the Moss Foundation. The other half goes to PALS because Pat survived breast cancer, and like her learning disabilities, she overcame cancer. Her art has given her the voice not only to be creative but also a means and a vehicle to support and help others.”

Patricia Buckley’s grew up in the Richmond Borough of New York City (now known as Staten Island). Although viewed as a poor student due to dyslexia, a grade school teacher said Pat was artistically gifted. Her mother enrolled her in the Washington Irving High School for the Fine Arts, in Manhattan, where her artistic abilities were nourished.

In 1951 she received a scholarship to New York’s Cooper Union for the Advancement of Science and Art where she spent four years specializing in fine arts and graphic design. Then Buckley married Jack Moss, a chemical engineer.

In 1964, Jack took his family, with their sixth child soon to be born, to the Shenandoah Valley of Virginia. Pat loved the rural scenery and respected the intense religious Amish and Mennonites. She integrated this into her art.

The first PALS support group meeting was March 18, 1991. In 1993 PALS approached Laura DeRamus, owner of the Canada Goose Gallery that has the country’s largest inventory of Moss Art, requesting that they team up with P. Buckley Moss to do fund raising for their support group.